Everyone waits for the arrival of Summers especially the children. The lovely carefree Summer Vacations for which we used to plan from February. In my hometown Baroda, the Summer was flagged by the presence of yummy bright yellow and orange mangoes. All the terraces used to be full of jars containing spicy pickles. All the roads were full of ice cream shops. I still remember tugging my Father’s hand the moment we passed the ice cream shop. These memorable events of life create an evergreen combination of ice cream and summer. Even today the very mention of Summer brings forth a sight of mango and ice cream. This has also encouraged creativity.

The first breakfast introduced to me after coming to the USA was Waffles and I immediately liked it. I have always had it with strawberry syrup but this year I was surprised. While wandering around the library I came across a nice shop called Waffallonia when I went to the library in downtown. There was a genuine smile on all the faces around that shop. They serve Waffles with Ice cream. I had the outstanding combination of Waffles, peanut butter and cinnamon ice cream.

Summer is also the time for juicy fruits like watermelon, grapes, etc. My mother always made sure, we have lots of fruits. One of her favorite ways to make us eat fruits was through fruit custard. She was really fast at that. Anytime we made a request and it would be present as a dessert. Last week, I went to the local library. It was really hot so I searched for frozen treats around library and came across The Meadows. There I came across different varieties of Frozen custard. This time it was frozen custard with crunchies.

Waffles, cream, crunchies are mostly available but it never occurs to us they could create such amazing desserts. This shows creativity has no limits, one can do so even with day to day things. Both Ice cream, waffles and custard are part of my list of favorite dishes but this year I had them with a twist. The trip to library definitely helped me discover these in addition to books. Next time you go for Ice Cream, do ensure you look around for something new in your regular favorite.

There are certain things which take you back to special moments of life. I recently had one such experience when I stood in front of the Carnegie Library of Pittsburgh. It was raining heavily but I felt as if I had gone on a time travel to the first day of College. The 19th century architecture reminded me of my college days in Baroda University, which was established at the same time. How grown-up it felt to say we are leaving for college. There was one thing common in the first class of each subject. The professor suggested a number of books for each subject. We asked one of the professors how were we going to cover so many books in one academic session. The professor smiled and replied, those were books on the same topic by different authors. It is up to the student to select the book he or she wants to refer. Initially we referred to the books which were popular choice among seniors. But the curious ones could not resist the urge to explore all the books suggested by Professors and that lead us to the amazing stack in the library.

I entered the Carnegie Library of Pittsburgh in the same time travel mode. The entrance at the stack had welcome written in various languages including Hindi. The stack of a library is a special place. There is always pin drop silence although there are people. The atmosphere is so serene that one can almost feel the presence of knowledge. If knowledge were to have a fragrance, it would definitely be there in the stack. There are rows and rows of book shelves and benches on either side of the wall. There used to be a break of 3 hours between our theory and practical classes in the first year. We used to spend this time in the library. As I walked in the stack, I remembered how we referred to each book and then chose the one which suited us the most. It is so similar to life. We all are presented with an array of options be it work or hobbies but most of us go for the popular choice ones. We forget each of us is an individual and has unique abilities. Maybe its laziness or the fear of being different which prevents us from pursuing other options. But I feel, when we pursue the option which suits us we develop our personality. We feel satisfied and enlightened, something which is very rare in today’s life. So the next time you have to choose from an array of options, make sure to check each and select the one which suits the individual “YOU”. 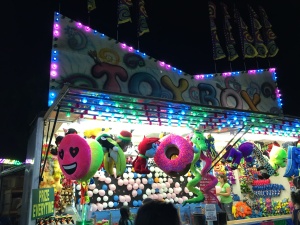 The colorful entrance to the fair

This Friday a friend of mine messaged me about a fair going on in my city. I googled about it and found its the North American Martyrs Summer Festival in Monroeville, PA. We left around 7:00 pm. This was the first time I was going to attend a fair abroad. Once we reached there the biggest challenge was to find a parking place. After parking we thought we will have to walk a lot but there was a shuttle to the fair.

As soon as we reached there, I was reminded of my school days. There used to be a ‘Summer Mela’ in my hometown Baroda. Visiting that fair used to be in the wish list of every child. It used to be a colorful fair with rides and delicious food stalls. This fair had all these elements. All the stalls were decorated with colorful balloons. There were rides, games and food. The aroma of fresh fries and cold ice-cream just aroused our taste buds. Everywhere kids were running, playing and shouting. To make this entire fair musical a live band played songs from 50s, 60s and 70s. I loved the rock and roll songs.

In this age of high tech entertainment, nothing equals the satisfaction of attending a fair. They seem to have fun for people of all age groups. The presence of family brings in security. It also allows us to spend quality time with our family. These are the opportunities when all the generations of the family come together and have a great time. By the time we returned it was late night, but we were so rejuvenated that we walked till the parking lot. Next time you visit a new place, make sure you attend the local fairs. 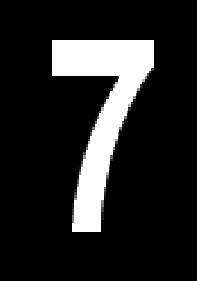 Recently I came accross the number seven for a number of things. This reminded of an incident. I was travelling from Baroda to Mumbai in Shatabdi. I still remember my seat number was C1,40. My ticket was checked and approved a few minutes after I boarded the train. The train stops for 10 minutes in Surat which comes two hours after baroda. The snacks at Surat station are so popular that everyone gets down at the station. As surat came everyone sitting around me got down to serve their tastebuds. I returned to the seat quickly and was sitting almost alone in the bogie. At that time a mother-daughter pair came and started looking for their seat. I was a little confused at this action as the bogie (railway carriage) was full when I had boarded and everyone’s ticket was also checked. Suddently the daughter came upto me and said,

daughter: Can you get up from my seat.

I was shocked at this order and replied: I have a confirmed ticket for this seat.

daughter: I just now saw in the sheet outside. My seat has been confirmed from waiting list and its this seat.

Me: Well yours was waiting list, mine has been a confirmed one since the last 2 months.

daughter: Check your ticket, I have just verified from the list outside.

This annoyed me and I replied, “My ticket has been checked and approved by the TTE an hour ago”.

This argument continued for sometime where both of us didn’t move from our grounds. Ultimately the girl decided to verify again from outside. She asked her mother to sit on the neighboring seat. The guy on that seat had a confirmed ticket which too was verified by the TTE(Ticket Examiner).

After few minutes the guy returned and the same argument occured between the mother and the guy. Finally the TTE was called who checked the list and replied,

“I checked all the tickets here. Your seat is in C7 not C1”.

To which the girl replied “Oh is it seven? I thought it was one”. At this, the entire bogie started smilling. 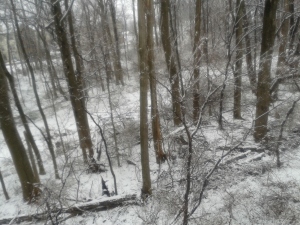 Sight from my window on Gudi Padwa and Ugadi

Today is Ugadi(Telegu new year) and Gudi Padwa(Marathi new year). This was always a day of celebration in my hometown Baroda as well as in Mumbai and Pune. In school days, march was a month of tension as April used to be the month of final exams of the academic year. The classes used to be in full force with syllabus being completed for every subject. Everyday we used to be told to prepare for the exams by every adult we met, be it the teachers, parents or neighbours. Also the 10th and 12th boards would be going on. Hence the entire neighbourhood used to be silent. Still Gudi Padwa used to bring happiness and cheer. Some of us used to reschedule our new year resolutions to this day.

My best memories of Gudi Padwa are in Mumbai and Pune. In mumbai, I used to have a team mate Preeti. Due to our long working schedules we had become fast friends. Every year she used to bring Puranpoli for me on this day. In pune almost the entire city seemed to be decorated. People would be wearing new traditional clothes. The shops would be decorated. Sometimes the entire building would be decorated. Even in our software companies, ladies would come dressed in Sarees. There would be mails wishing everyone. Last year my maid specially made puranpoli for me.

The month of march is really beautiful in Baroda(Vadodara), Pune or Mumbai. All trees are green and gardens are full of flowers. I loved to see the unripe mangoes(karies) hanging on the trees.This year I am in Baltimore and had a completely different Gudi Padwa. After a week of sunshine, it snowed. Hence instead of a bright I had a cold snowy Gudi Padwa making the new year a new experience. But then we all should have some unique experiences, thats what makes our life colorful. My work went smoothly throughout the day. Also 20th march’2015 is the first day of spring. Even google is celebrating it with a google doodle. I thank everyone who made this festival special for me.

I wish everyone a very Happy Gudi Padwa and Happy Ugadi.