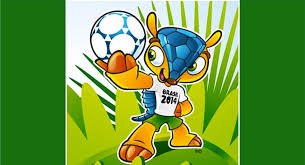 When I got up in the morning, today 12th june’2014, was just another working day. I dressed up and boarded the bus to office. As soon as I put on the earphones for radio, the specialty of this day dawned on me. The RJs were excited and there were games for listeners. As soon as I logged on my PC, there was a mail with a similar game. Even google paid its tribute by dedicating a doodle to it. Today is no less than any important festival, it is the day when World Cup’2014 is starting.

This realization took me to my school days. My father, who is a soccer fanatic, always ensured the first day of World Cup was made special. From morning he would be checking all the connections of Television and cable. He even ensured a backup was there just in case the cable didn’t work. We were told to complete our homework beforehand. I still remember the first day of world cup’98 when most of the people were unable to watch live due to monsoons but our T.V was working. All credits to papa’s backup planning. Our living room was filled with family friends and one of the Uncles even came dressed in yellow and black. Mom always ensured we watch opening ceremonies of all sports events be it Olympics, world cup, etc. As a result we came to know the names of many countries easily and even identify different flags. Thanks mom for teaching geography without using any books.

The best part of Soccer World Cup is people from all over the world irrespective of all their differences unite and watch it. It just brings the world together. Can there be a better tribute to universal brotherhood? Today is the opening of World Cup’2014. I would be joining the entire world to pay my tribute to sportsmanship. Will you?

I am just a simple girl looking at the world and trying to locate herself in it. This blog contains my views on what I see in this world.